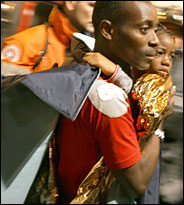 PARIS, Sept. 20 – The French news media were captivated by Hurricane Katrina, pointing out how the American government’s faltering response brought into plain view the sad lot of black Americans. But this time the French, who have long criticized America’s racism, could not overlook the parallels at home.

"It is true that the devastations of Katrina have cruelly shed light on the wounds of America, ghettoization, poverty, criminality, racial and territorial tensions," Le Figaro, the conservative daily, said in an editorial on Sept. 8. "In France, those in disagreement ran to pelt the ‘American model’ and the neoconservative president. But have they just looked at the state of their own country?"

In neighborhoods like Château Rouge, filled with the hundreds of thousands of nonwhite immigrants, some Arabs but mainly blacks, whom France has absorbed over the years from former colonies in Africa and the Caribbean, you feel the anger.

"It could be a coincidence," said Sissouo Cheickh, bitterly, "but one question the French have to answer is: of 48 people who died, why were 48 black?"

Mr. Cheickh, 28, got a university degree in France, but rather than working for someone else and running into what he and other young blacks say is France’s low glass ceiling, he decided to start his own business. Six months ago he scraped together some money and opened a store.

"You see these fabrics? All from Africa, from my family," said Mr. Cheickh, who came from Mali, as he gestured toward colorful rolls of cloth.

France has long boasted of itself as the cradle of human rights and a bulwark against racism. It regularly denounced racism in the United States, and the road from Harlem to Paris was wide, inviting talented American blacks like the dancer Josephine Baker, musicians like Sidney Bechet and writers like Richard Wright and James Baldwin.

But French insistence on the equality of man leaves them in a bind, their black critics say, perpetuating the fiction of a society without minorities.

The census in France does not list people by race. Hence, while blacks are thought to number about 1.5 million, of a total population of 59 million, no one really knows the exact number, which is estimated to be far higher.

There are virtually no black people in corporate France, and blacks have almost no political representation. No black person sits in the National Assembly or in a regional parliament, and only a smattering are found in city councils. The European Union finances programs for minorities but not in France, because of its refusal to recognize minorities.

So, today, blacks are not much on the French agenda. After the recent fires, the interior minister, Nicolas Sarkozy, proposed a program of affirmative action and a requirement that résumés conceal a person’s ethnic or racial identity. But the rest of the cabinet, including the minister for equal opportunity, rejected the ideas, saying they offended the fundamental principle of equality.

"The French like to say, ‘Blacks are a social problem, not racial,’ " said Gaston Kelman, 52, a native of Cameroon who has written widely on France’s black population. "So our institutions have no means to overcome it."

Until recently, virtually all blacks were on the lowest rung of the social ladder. Gradually, however, a younger generation is, like Mr. Cheickh, gaining education, starting businesses and gradually giving birth to a black middle class. They feel the discrimination they say is rampant in French society and are beginning to resist.

After graduating with a degree in economics and data processing, Claude Vuaki tried his hand at several jobs before deciding to start his own business. Together with his wife, Kibé, he opened a beauty salon in central Paris. But Mr. Vuaki’s search for start-up capital was typical of the black experience. "They said right off, no loan, no money," said Mr. Vuaki, 52. He and his wife managed to gather some family savings and self-financed their shop.

Now the business is so successful that they plan a second shop, in Nice or Cannes. Mrs. Vuaki travels regularly to the United States to study African-American hairstyles.

Still, Mr. Vuaki remains one of a relatively small minority. Most blacks are employed in menial jobs, in construction or transportation. What encourages people like Mr. Vuaki is that the glass ceiling often felt by young blacks who get an education is not discouraging them, but increasingly prompting them to strike out on their own.

"A lot of people I know want to create something of their own," he said, often in landscaping, construction and delivery services.

Still, Mr. Kelman said this slight opening is not inhibiting many young Africans with an education to strike off for Britain, Canada and the United States, where they think they will find greater opportunities.

Asked whether the French people are racist, Mr. Kelman replied: "It’s a racism of nuance. Every Frenchman would immediately say, ‘One of my closest friends is black.’ "

Mr. Kelman said government housing and employment policies create an "institutionalized ghetto-building." He described with a laugh a typical job interview for a black candidate. When the boss realizes the candidate is black, he begins praising the sights and sounds of Africa he discovered on his last vacation there: the broad beaches, beautiful greenery, vast sky. Needless to say, the candidate doesn’t get the job.

In the schools, white pupils are typically encouraged to continue studying while black children are often steered toward vocational studies. The influence of African-Americans, through television, films and sports, is everywhere. Some young blacks turn to Afrocentrism, Mr. Kelman said, others to rappers and others to black Muslim groups. What they don’t turn to is mainstream French society.