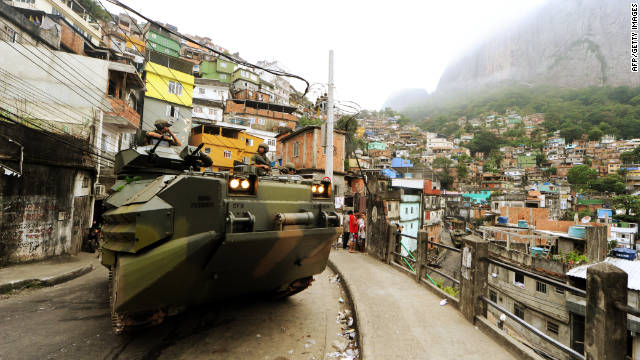 CNN and other global news outlets reported over the weekend that Brazilian authorities, inclusive of the police and the national army, raided a gang infested area of the poor — an area known as Rocinha, in Rio de Janeiro, Brazil.

The government is to be commended for taking a positive position for the poor and the under-served who were forced to live amidst a war zone of drug dealers and gangs.  This particular area is home to more than 100,000 inhabitants, and the gangs had a near monopoly on the area.

That said, the toughes job was not raiding the area, but now encouraging legitimate trade and business from and within the area. In other words, the government must now succeed at what France and other countries have so far respectfully failed at; what comes next.  It is winning the peace, not the war, that counts most.

The government would be wise to create and launch a strategy, RIGHT NOW, focused on empowering the residents of the area, but mostly the youth, around what we at Operation HOPE call silver rights; or making free enterprise and capitalism work for the poor.

The government would be wise to launch a countrywide effort to reach, touch and touch every young person with a required course in financial dignity.  Teach these young people the universal and honest "language of money," and then encourage them to become young entrepreneurs, new small business owners, and self-employment projects.

The government should provide real incentives to business, to both send employees as volunteers into these areas to teach both young and adults the language of money, and to double as essential role models too.

Finally, the government should encourage companies, and provide real incentives, to pick up as many young people as possible — right out of school — as new interns in their businesses.  This done provided the youth meets some minimum requirements at and from school, and pass a basic set of courses in financial dignity, in their community.  The government should bring in someting like the Gallup-HOPE Index, recently launched in the U.S., which can measure not only the existing levels of financial literacy and economic energy amongst today's youth in community and across the country, but also track the trends with respect to their future aspirations.  The future trends are everything.

We must not just prosecute criiminals, but provide the next generation with the only sustainable deterent to them following the same useless path — and that is hope.

John Hope Bryant is a thought leader, founder, chairman and CEO of Operation HOPE and Bryant Group Companies, Inc. Magazine/CEO READ bestselling business author of LOVE LEADERSHIP: The New Way to Lead in a Fear-Based World (Jossey-Bass) the only African-American bestselling business author in America, and a Member of the U.S. President’s Advisory Council on Financial Capability for President Barack Obama.  Mr. Bryant is a co-founder of Global Dignity with HRH Crown Prince Haakon of Norway and Professor Pekka Himanen of Finland. Global Dignity is affiliated with the Forum of Young Global Leaders and the World Economic Forum.